The second period, covering the years between the two world wars, a period which turned out to be very challenging for the world economy.  Nevertheless, EAC continued to expand and at the end of 1920s, EAC and its subsidiaries had over 20,000 employees on 6 continents. 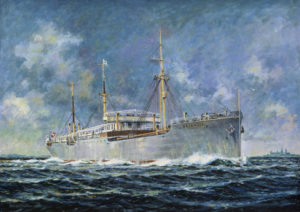 The effects of the wars, the subsequent changed political landscape, increasing protectionism and the 1929 economic crash, caused the Company to be less dependent on its original strategy for inter dependence and mutually beneficial interplay between the businesses it controlled. Initiatives to expand the local markets, where EAC had gained strong footholds, became a new focus area.  Products and services from third parties were being included in the Company’s trading and shipping portfolio, resulting in significant increase in the Company’s turnover.

The Company was now left with only three businesses with a turnover of DKK 3 billion, a market value of DKK 11 billion employing 4,000 people. With a cash position of more than DKK 8 billion, the board of directors considered various strategic alternatives for the Company to pursue. It was decided, however, to recommend to shareholders to distribute the company’s cash position in one dividend disbursement. At the same time, the board committed to develop the Company’s remaining three businesses to maximize their value, divest them and distribute the proceeds to shareholders as dividend pay-outs.

After disposing of two of the three remaining businesses, the Company’s listing on the Copenhagen stock exchange, which dates back to 1897, was transferred to the third and last business unit, Santa Fe Group Limited, which is headquartered in London, United Kingdom.